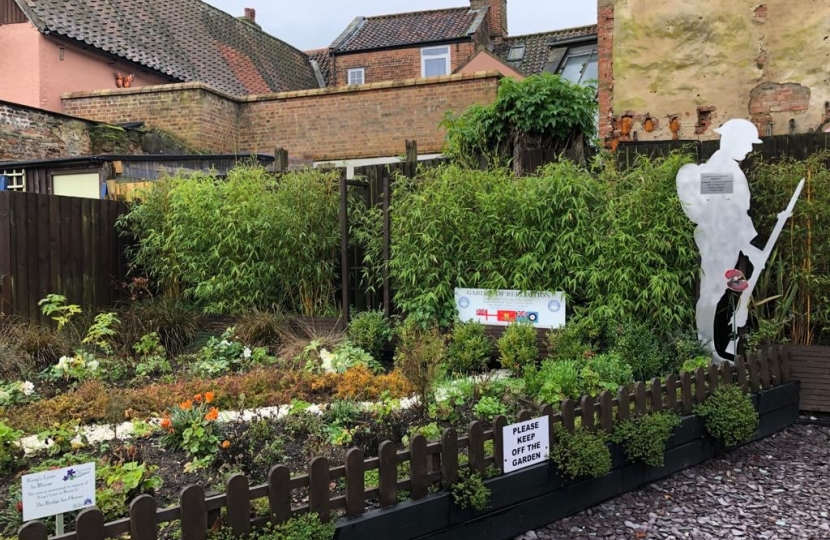 In one of his first parliamentary questions, James asked the Parliamentary Under-Secretary of State for Defence to support efforts to do more to tackle the disadvantage bereaved services children can face in the education system. He was also very proud to join the Armed Forces All Party Parliamentary Group in January 2020, which exists to promote better understanding of Her Majesty's Armed Forces in Parliament and he is also a member of the All Party Group for Veterans.

King's Lynn is home to two military charities who do vital work in our communities - Scotty's Little Soldiers and The Bridge for Heroes.

Scotty’s Little Soldiers is a charity dedicated to supporting children & young people who have lost a parent whilst serving in the our Armed Forces.

James was delighted to visit  Scotty's Little Soldiers for the first time shortly after his election in January 2020. James met the team at the King's Lynn HQ including Head of Families Stuart Dark and was briefed on the challenges facing bereaved service children and how Scotty's Little Soldiers goes about supporting them. He continues to support their efforts to support bereaved service families.

This is a fantastic local charity doing brilliant things for children from military families.

The Bridge for Heroes was set up by Mike Taylor just over 10 years ago, to provide help and support to those in the veteran community most in need, many of whom were finding the adjustment from service life to the civilian community difficult to manage. Since it started it has supported well over 1,000 veterans in a multitude of ways, from dealing with housing and benefit issues, to supporting those struggling mental health problems.

In June 2020, the charity's team of volunteers received the prestitigious Queen’s Award for Voluntary Service, the highest award a voluntary group can receive in the UK.

With the onset of the Covid-19 pandemic, the charity has quickly responded by reconfiguring their usual ‘drop-in’ approach to an ‘out-reach’ service. Volunteers have managed to provide an even wider range of support ranging from the delivery of essential provisions and prescriptions, to offering person to person advice and well-being support for those suffering the most from self-isolation. The charity has also invested in a new online chat and webinar services enabling veterans to maintain contact with their friends at the charity and their peer group.

James will continue to work in Parliament to ensure that the Armed Forces Covenant is honoured and that no one who serves, has served, or their families faces no disadvantage compared to other citizens as a result of their service.

The Armed Forces Act, which gained Royal Assent in Parliament today, enshrines the Armed Forces Covenant in law for the first time to help prevent service personnel and veterans being disadvantaged when accessing essential services like healthcare, education and housing.

In a debate in Parliament, James spoke about plans to modernise the Armed Forces highlighting the importance of getting better control of costs, plans to deliver efficiency savings, and an improved offer for servicemen and women.

A National Insurance contributions holiday for businesses who employ armed forces veterans came into force on 6 April 2021, delivering on one of the major Conservative manifesto commitments.

New plans set out the future for our armed forces

The release of "Defence in a Competitive Age" marks the beginning of a significant change in how our defence is equipped and operates.

In the House of Commons, James welcomed the new Armed Forces Bill which will help prevent service personnel and veterans being disadvantaged when accessing key public services.

Several government departments are starting a new initiative today to make it easier for veterans to secure employment in the civil service.

On Wednesday MPs debated the Overseas Operations Bill in the House of Commons. This Bill would help protect British servicemen and women by providing greater legal protections to armed forces personnel and veterans serving on military operations overseas.

The Bridge for Heroes Volunteers Receive the Queen's Award

The Bridge for Heroes, a Lynn charity that provides vital support to the veterans community, has received a prestigious award.

The charity's team volunteers have been honoured with the Queen’s Award for Voluntary Service, the highest award a voluntary group can receive in the UK.

James asked the Parliamentary Under-Secretary of State for Defence to support efforts to do more to tackle disadvantage bereaved services children can face in the education system.

I was very proud to join the Armed Forces all party parliamentary group today.