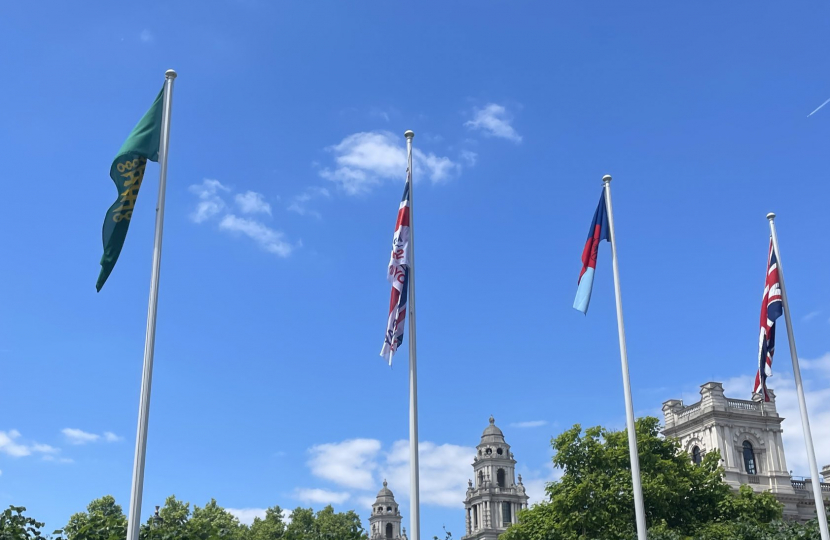 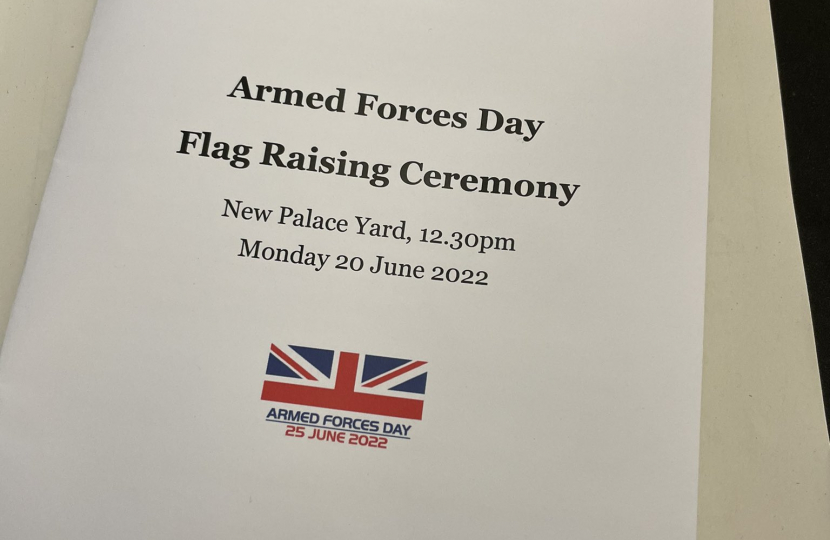 As James attended the Armed Forces Day flag raising service in Parliament, the government has provided an update on the progress of the Veterans' Strategy Action Plan.

James joined the Speaker of the House of Commons, MPs, peers, and members of the Armed Forces and their families for the service which focused on the families of those who serve, and who have served. Children shared their own experiences of saying goodbye as parents go on operations and the rendition by the Voices of Armed Forces Children’s choir who got to the semi-finals of Britain’s Got Talent of “Welcome Home” was especially powerful.

Commenting after the service James said:

"I was pleased to join the flag raising ceremony in Parliament ahead of Armed Forces Day with poignant readings on the impact of service on children and singing from Voices of Armed Forces Children Choir. It is Important to thank those who serve, veterans, and their families"

In the update published by the government is showed:

All central government departments are now guaranteeing veterans progression to the next stage of recruitment, known as the Great Place to Work scheme.

New figures released today show that 800 veterans have already been offered employment through the scheme. The government is taking steps to maximise veteran employability, which we know is the key to positive life outcomes.  A successful recruitment round for the new Advance into Justice scheme, which gets veterans into prison officer roles, has also recently closed.

Meanwhile, more than £1 million in new money is being invested into a new digital service for veterans, which will enable them to quickly and easily verify their veteran status online.

The project, which is due to be available for all veterans in 2023, will make it easier and quicker to demonstrate their military service in order to access a range of government and charity services, and reduce waiting times and the likelihood of fraud.

Chancellor of the Duchy of Lancaster Steve Barclay said:

"Our digital ID plans will help to deliver real change to the lives of our veterans, giving us the capability to more quickly identify those that need targeted support so we can then fast-track them through the system and get them what they need.

We are also putting a real focus on helping our veterans into work, recognising the brilliant skills they have and identifying great employment opportunities in cyber security, the prison service and logistics.

I’m determined to make the UK the best place in the world to be a veteran and that means harnessing the power of government to drive change and working alongside the charity sector too to make a difference."

This digital verification is also a key step towards delivering Phase 2 of the Veterans ID card roll out. The ID card, which from December 2018 has already automatically been given to any personnel who leave the military, helps veterans access specialist support and services and maintain a tangible link to their career in the forces.

Progress has been made improving healthcare provision for veterans. Op COURAGE, the bespoke mental health pathway for veterans in the NHS in England, has launched backed by over £17 million a year investment, plus an additional £2.7 million over the next three years. The service will bring  three bespoke veterans’ mental health services into one long-term integrated service from April 2023.

Waiting times for veterans reduced for an assessment via Transition, Intervention and Liaison Service (TILS), one of the three services included in Op COURAGE, has dropped from 6 weeks in 2018/19 to 2 weeks in 2021/22, meeting the 14 days target.

The number of ‘Veteran-Friendly’ GP surgeries has also increased since the publication of the Action Plan, with a 17% increase from 1,200 to over 1,400.

In January, the Government launched the Veterans Strategy Action Plan of more than 60 commitments backed by an extra £70 million. Great progress is being made with over a fifth of commitments already completed after just six months.