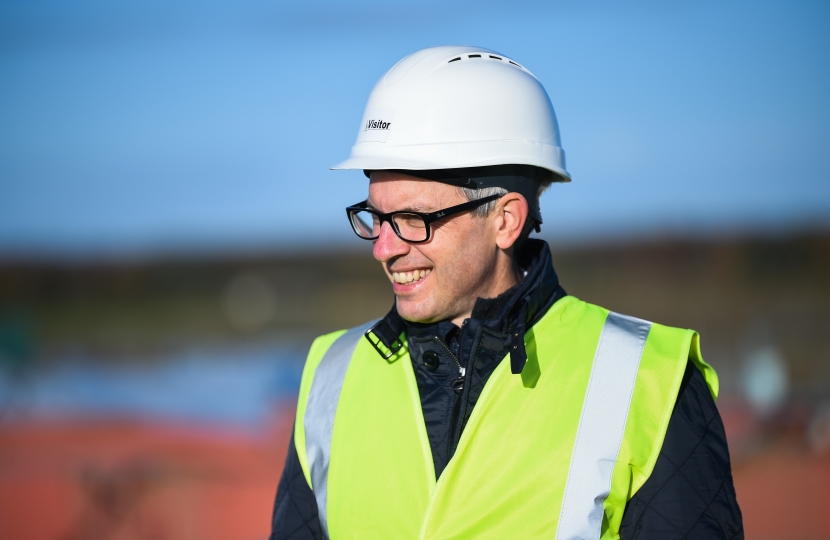 James was elected in December 2019 as the MP for North West Norfolk.

Born in Norwich, James grew up in North Walsham and was lucky enough to win an assisted place at Norwich School.  Although he studied at Queen Mary University, and worked in London he has kept his strong links to the county - not least as a season ticket holder at Carrow Road! James fought North Norfolk at the 2017 general election and it has always been his ambition to represent Norfolk in Parliament.

Before being elected to Parliament, James had a number of roles in both the public and private sectors. Over the last six years he has been a Special Adviser to senior Cabinet ministers including the Defence Secretary and the then de facto Deputy Prime Minister. From July 2019 until the general election, James was a Senior Special Adviser to the Prime Minister in the Brexit Unit, helping secure the new Brexit deal. Prior to his roles in government, James worked in the private sector including for a consultancy advising major international business and for a leading mobile communications company.

Since being elected to Parliament, James has been a strong voice locally and in Westminster for North West Norfolk. His top priority is securing investment for the Queen Elizabeth Hospital and he has been lobbying the Prime Minister and Health Secretary to include QEH in the government's health infrastructure programme. He has been campaigning for improved infrastructure to support jobs and growth including better rail services and the introduction of 8 car trains from King's Lynn to Cambridge as well as major investment in Ely North to increase capacity and unlock half-hourly off peak services from King's Lynn to King's Cross.

James is working to ensure that North West Norfolk benefits from the government's levelling up agenda including through his role on the King's Lynn Town's Fund Board. He has championed #LoveWestNorfolk to support tourism and heritage which is an important part of the local economy. He is promoting the beautiful coastline, countryside and protecting chalk streams by working with the Norfolk Rivers' Trust, RSPB, National Trust and other local groups. He meets with Norfolk Police regularly to raise residents' issues and to be briefed on plans to cut crime, including tackling county lines drug gangs.

James is a member of the powerful Public Accounts Committee which holds the government to account for how taxpayers' money is spent.

In September 2021, he was appointed as Parliamentary Private Secretary (PPS) to Rt Hon Oliver Dowden MP, Conservative Party Chairman and Minister without Portfolio. A PPS is an unpaid assistant to a Minister, selected from backbench MPs to be the ‘eyes and ears’ of the Minister in the House of Commons. They often advise the Minister on the state of parliamentary or party opinion, and act as a two-way channel of communication between the Minister and backbench MPs.

“I’m delighted to have been appointed Parliamentary Private Secretary to Oliver Dowden the Conservative Party Chairman and Cabinet Office Minister without Portfolio.

"This is an exciting opportunity to work with him to support this government’s commitment to level up across the country and act as a link with the parliamentary party in delivering on our manifesto pledges and the people’s priorities.

"My priority will continue to be a strong voice for North West Norfolk campaigning for a new QEH, to improve King’s Lynn, to back business, promote opportunity, for better broadband and transport links, and to improve our environment.”

He is a member of a number of All Party Parliamentary Groups including the Armed Forces; Veterans; Cricket; Dark Skies; Motor Neurone Disease; Gambling Related Harms; and Motorsport.

As well as supporting Norwich City, James regularly watches the Linnets at the Walks.

He lives in the constituency and will often be found running, or cycling, around the countryside or on the coast.

A day in the life of James Wild MP

During Covid-19 James is regularly speaking to constituents on the phone or Zooms call but due to government restrictions he has been unable to conduct the face to face meetings, visits, and surgeries that he enjoys.

On 16 January 2020, James Wild delivered his Maiden Speech in the House of Commons in the Health and Social Care debate.