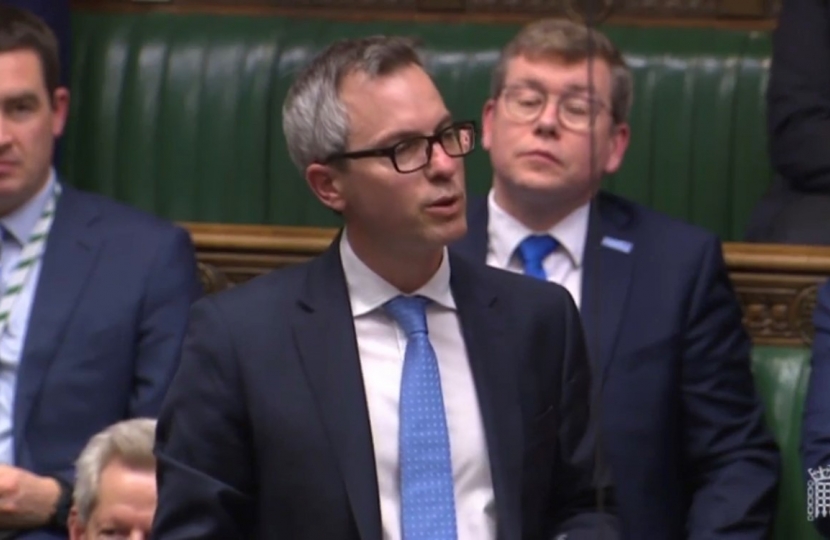 On 16 January 2020, James Wild delivered his Maiden Speech in the House of Commons in the Health and Social Care debate.

In the speech James set out his priorities and how he will be a strong voice for North West Norfolk in Westminster. He focused on the Queen Elizabeth hospital and his campaign to secure more investment as well as talking about the towns, villages, people that make up this wonderful constituency.  You can read James' whole speech here or watch the video above.

"It is a huge privilege, as someone born and bred in Norfolk, to stand here having been elected to represent the people of North West Norfolk. I thank them for putting their trust in me, which I will do my very best to repay.

I have many auspicious predecessors, including Sir Robert Walpole, our first Prime Minister. However, I want to pay particular tribute to my immediate predecessor, Sir Henry Bellingham. Henry was a great constituency MP who represented the area for over 30 years. He is rightly recognised locally as an assiduous champion for his constituents, regardless of how they voted. Indeed, ​such is his commitment that I was delighted to speak alongside him at a planning inquiry on Tuesday this week. I am sure the House will agree that, as a Member of Parliament and a Minister, he more than met the aim that he expressed in his maiden speech: to remove some of the “blemish” of a family member who assassinated a British Prime Minister. Echoing my hon. Friend the Member for Watford (Dean Russell), I know that I have big shoes to fill.

King’s Lynn is at the centre of my constituency, and its rich heritage dates from the 13th century, when it was one of the country’s main ports. Today, it continues to make a significant contribution to our local economy. This month saw the 575th anniversary of the first play performed at St George’s Guildhall, the oldest working theatre in the UK and the only one that can claim that Shakespeare performed there. The guild was founded, incidentally, by another of my predecessors, John Brandon, known as Britain’s greatest pirate. Channelling his spirit, I want to secure some of the treasure of the towns fund, the future high streets fund and the other investment coming from this Government for North West Norfolk.

Beyond King’s Lynn, my constituency is blessed with a beautiful coastline from Hunstanton to Holme and Brancaster to the Burnhams. To the west are the villages in the marshland—from Clenchwarton to Walpole St Peter. It is an area with a diverse economy, with much to offer, but it needs the infrastructure investment to help it thrive and take full advantage of the opportunities of Brexit. We also have a wealth of excellent pubs in the constituency: the Dabbling Duck in Great Massingham, the Rose & Crown in Snettisham and the Black Horse Inn in Castle Rising. As you can tell, Madam Deputy Speaker, I have been working hard to find the best, and I hope that the Budget will have good news for beer drinkers in all of them.

The Love West Norfolk campaign is doing a great job to promote all the good things about the constituency, but there are challenges—rural bus services, broadband, flood risk, educational outcomes—that I will want to help tackle in my time in this House. Healthcare is at the top of my constituents’ list of concerns, so I strongly support putting into legislation this record investment in the NHS. Similarly, our manifesto pledge to have 15 million more GP appointments has been widely welcomed, as has the excellent Pharmacy First initiative. During the election, I saw where that investment was going when I visited the site of the new surgery coming to Burnham Market, which will serve surrounding villages and also, importantly in my constituency, will have a dementia suite. Tomorrow, I will be meeting constituents who are concerned, as am I, about plans to close the GP surgery in Fairstead.

More than one constituent looking to find an NHS dentist has commented to me on the absurdity of the advice on the NHS website, recommending that they go to Skegness as the nearest practice. Flying across the Wash may be practical for the migrating pink-footed geese that are a great sight in the big skies of Norfolk, but it is not very practical advice for my constituents, so dental provision is an issue that I will be working on in this Parliament.

As well as the need to improve mental health services and social care, the Queen Elizabeth Hospital—the QEH—in King’s Lynn is extremely important to my constituents. Although it is in special measures, there is ​new leadership there, and on Friday I went to see for myself the improvements that are taking place, so the opportunity to speak in this debate is very timely. My visit came after an intense period in A&E, with a tenfold increase in the number of flu cases. Pam, the matron of A&E, was a great ambassador for the hospital—committed to delivering for patients and, despite all the challenges, she was still smiling. I met a dedicated maternity team, improving the service for new parents and supporting those who, sadly, suffer bereavements. I was glad to speak to the porters, cleaners, infection teams and security guards—the people who do not get the recognition they deserve, for they are the ones who can tell you what is really going on in the hospital. What came across to me was the passion of the staff: people proud of the improvements they have delivered for their patients, but who want to continue that journey and take the hospital out of special measures. As their MP, I pledge my support for them.

This year marks the 40th anniversary of the Queen Elizabeth Hospital. However, it was built with a life expectancy of 30 years, and its age is showing. The design does not lend itself to current clinical practices, care pathways or patient flows. A&E is too cramped to meet demand, and the roof has major structural issues. So, in this decade of renewal—with the infrastructure plan and the biggest cash investment in the NHS—I spy an opportunity not just to fix the roof, but to do more. I have spoken to my right hon. Friend the Secretary of State during the election campaign and since about the Queen Elizabeth Hospital. I know he will consider carefully proposals from the trust for capital investment—proposals that also harness digital technology. The QEH currently languishes near the bottom of the digital league, when it aspires to be like King’s Lynn FC, which is riding high at the top of the Vanarama National League North. The QEH is up for change, and it is up for innovation.

My right hon. Friend has previously accepted an invitation to come to the hospital, and I would be delighted if he will join me in the near future to come and see how we can make the real improvements that the people of North West Norfolk deserve."

James was elected in December 2019 as the MP for North West Norfolk.