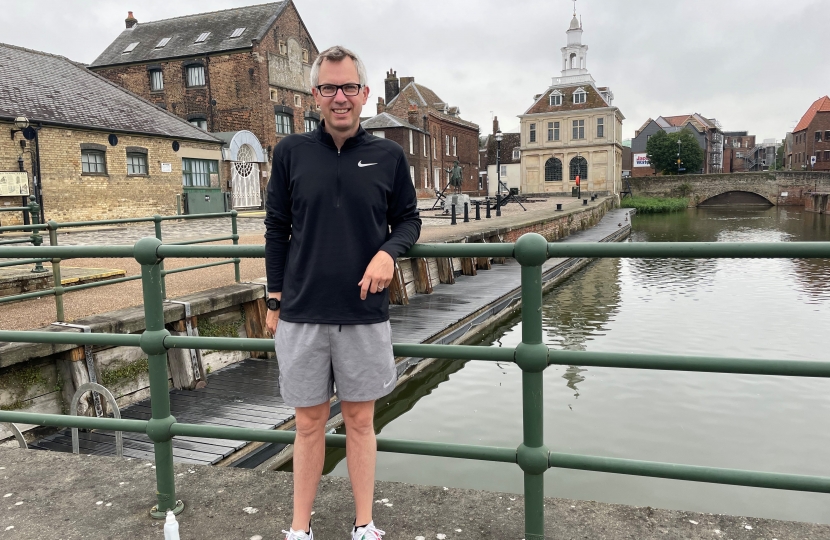 James is running the Virgin Money London Marathon to raise funds for three North West Norfolk based charities that he has been working with since being elected - the Purfleet Trust which helps homeless people, Little Discoverers disabled children's charity, and West Norfolk Carers who support carers.

TO DONATE TO THE CHARITIES PLEASE VISIT:

The Purfleet Trust provides help for homeless people in King’s Lynn and West Norfolk including offering advice to help find accommodation and support to help them maintain their tenancies. James has supported their work and through his membership of the Public Accounts Committee has drawn on their expertise to help influence government policy on ending rough-sleeping. James recently visited the new Pathways Project which aims to provide the opportunity for homeless and vulnerable people to develop new practical skills for the world of work.

“Everyone at Purfleet is grateful to James for choosing us as one of the charities he is raising funds by running in the London Marathon. It is an amazing, inspiring and generous thing to do and we would like to thank James for all the effort and training he has put in to preparing for the event, we will be cheering you on from Kings Lynn on Marathon day! Support like yours enables us to help continually improve our services and helps us to raise awareness of the issues relating to homelessness in West Norfolk.”

Little Discoverers in King's Lynn provides free group sessions to support young children aged up to 5 with disabilities to improve their physical independence. Parents come with their child and using methods inspired by the Peto Institute of Conductive Education, learn through a multi-sensory approach how to improve their physical, communication and social skills, while having lots of fun. James has joined Little Discoverers' last two AGMs to find out more about the progress the children have been making and the real difference it makes to the lives of families in West Norfolk.

“ James has really involved himself in West Norfolk and we were delighted and honoured when he picked out Little Discoverers to benefit from his endeavours”.

West Norfolk Carers supports unpaid carers and their families. They work to help family carers to improve their emotional and physical well-being, resilience and abilities to cope with their caring roles-whilst also have a ‘life of their own’. In April, James met young carers from West Norfolk virtually to talk about the challenges they face and he was impressed by the resilience that they showed as well as importance of the roles they play at home.

"We are so thrilled and grateful that James will take time from his busy schedule to run in the London Marathon to raise money for small charities like ours. James' commitment to us means a great deal to us. Young Carers especially feel forgotten and overlooked, and that someone like James is prepared to run for them really makes a big difference to them. We're thrilled, and wish James the very best of luck!"

“It’s nearly a decade since I last ran the marathon and I am delighted to have the opportunity to raise funds for some brilliant local charities by running it again.  When I hit tough patches in training and certainly on race day, the motivation of helping those making such a difference to young children’s lives, supporting carers, and helping homeless people will spur me on.”

In every race since the London Marathon started in 1981, the organisers have reserved some places for MPs and James has secured one of this year’s slots. It will be the third time that he has run the 26 miles and 365 yard course with a fastest time of 3:33:33 recorded in 2009. The fastest time recorded by a MP was by former Conservative MP Matthew Parris who finished in 2:32:57 in 1985.