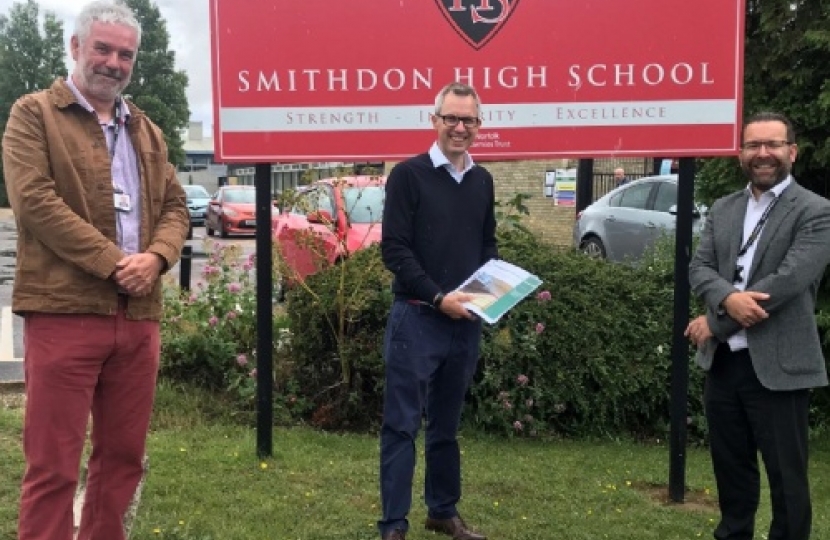 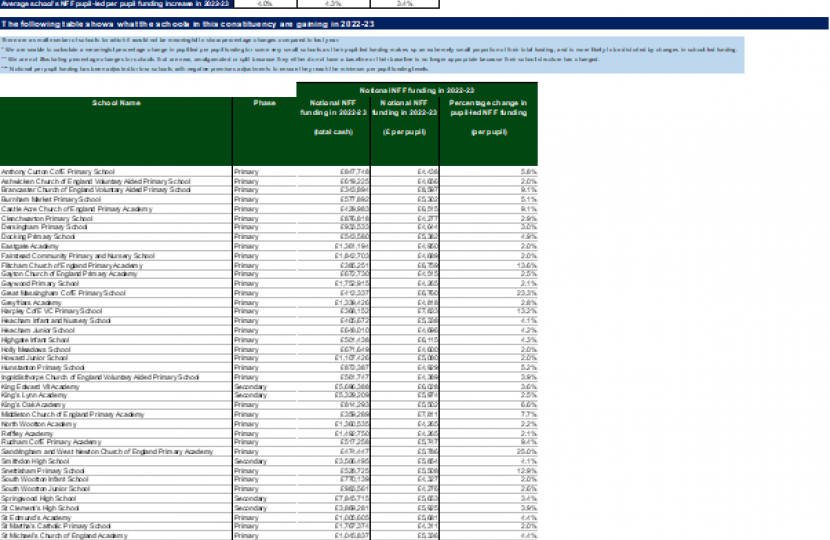 In a boost for West Norfolk students, Smithdon High School in Hunstanton has been included in the second round of the Prime Minister's school rebuilding programme to level up and spread opportunities for all.

Smithdon is one of 50 new schools that have been confirmed as part of the Prime Minister's ten-year rebuilding programme with the majority in the Midlands and North of England. The 50 projects announced today bring the total numer of schools being upgraded to 100, with the programme due to deliver 500 rebuilding projects over the next decade. James was interviewed on Radio Norfolk about the announcement.

James visited Smithdon a year ago to inspect the new facilities that had been provided during lockdown as well as to review the remaining issues with the state of the buildings. He spoke to John Hirst the Headteacher and West Norfolk Academies Trust Executive Head, Andy Johnson about the challenges these create for pupils and staff and the school's technical team set out potential solutions. Following that visit James has worked with the school to lobby the Education Secretary and the Minister for the School System on the need for further capital investment.

Funding for Smithdon from the School Rebuilding programme will be determined when the scope and delivery plans at the school are developed following a site inspection. Projects under the programme will range from replacing or refurbishing individual buildings through to whole school rebuilds.

James Wild MP said: "It is great news that Smithdon High School has been selected as part of the schools rebuilding programme. Since I saw the issues with the buildings first hand, I have worked closely with the school to make the case for investment to ministers and that need has now been recognised by the government. This will help the school to deliver better facilities for pupils in Hunstanton to learn and realise their potential.  It is another example of West Norfolk benefitting from the government's levelling up agenda to spread opportunity which is as relevant here as other parts of the country."

John Hirst, Headteacher of Smithdon High School said, " "I'm delighted with this significant investment in education in Hunstanton and West Norfolk. Once our school has been rebuilt, it will make a huge difference to our students, where their talents can be identified and nurtured in an outstanding twenty-first century school mirroring the great teaching and support that already takes place at Smithdon. We're looking forward to meeting with the Department for Education next week to further discuss this project and the next steps."

Funding for small and remote schools is also being boosted by £53m in 2022-23 recognising these schools are often at the heart of the rural communities they serve.

High needs funding, to support children with special educational needs and disabilities, is increasing by £780m in 2022-23. This comes on top of the over £1.5 billion increase over the previous two years.