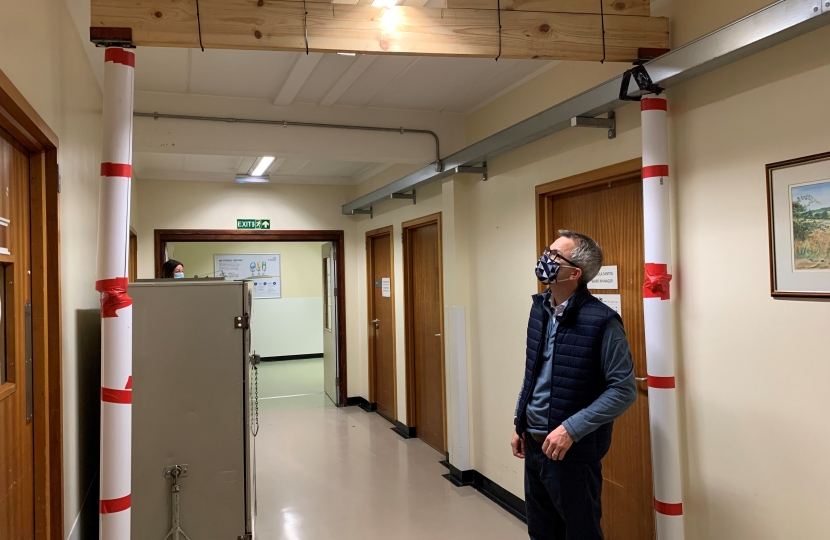 QEH has been granted £20.6 million of new funding to help manage short terms fixes and improvements to the roof and other areas.

The funding from the Department of Health and Social Care was confirmed during an urgent meeting James organised with Ed Argar MP, Health Minister, and QEH's Chairman and Chief Executive following the temporary closure of the critical care unit. During the meeting, James and QEH set out the urgent issues facing the hospital with 131 props holding up the roof across many parts of the hospital.

This new funding will help manage the short term issues. However, the position with the roof will continue to deteriorate and James highlighted that QEH estimates it will cost £554 million over the next decade to manage the risks associated with the existing roof and structural concrete plank issue. In contrast, he pointed out that a new build to transform the hospital to meet modern healthcare requirements has an estimated cost of £679 million.

Speaking after the meeting James said:

"I know many people have been very concerned at the reports of props securing part of the roof in wards at QEH. When we met the minister he confirmed £20 million this year to help manage roof issues and I welcome this significant new capital funding. However, these issues will continue to deteriorate and we need a new hospital or substantial rebuild. I will continue to work with the Trust to develop the business case and to campaign for QEH to be one of the additional new hospitals the government has committed to."

"The Trust very much welcomes the £20.6 million of national capital it has been awarded to fund the short term fixes and improvements needed to ensure patient and staff safety as surveys increasingly identify failings with the roof planks, indicating more rapid deterioration of the hospital's estate."

“We fully recognise the need to invest in improving health infrastructure across the country, including where trusts have identified significant issues. Queen Elizabeth Hospital, King’s Lynn will receive over £20 million to directly address the most immediate issues. We will shortly announce criteria and process for a further eight schemes to be included in the new hospitals programme."