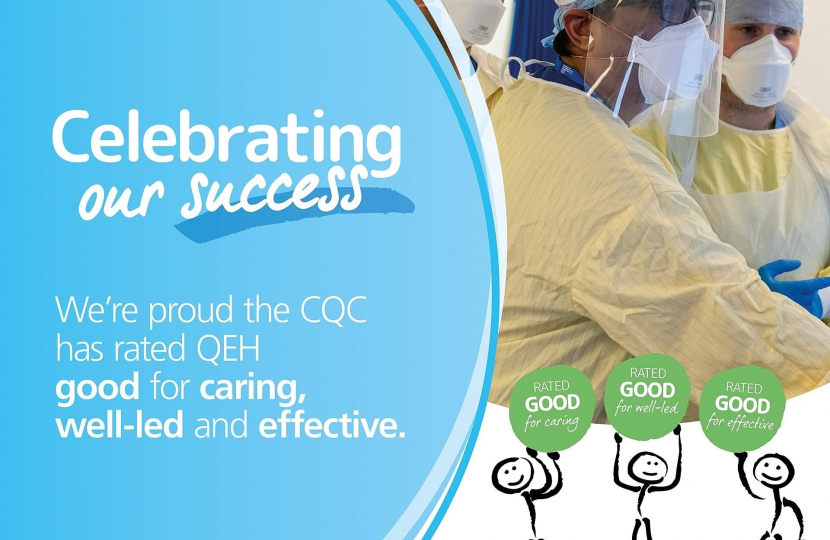 QEH was recommended for exiting the Recovery Support System (formally known as 'Special Measures') following successful Care Quality Commission (CQC) inspections in December 2021 and January 2022, which saw the Trust rated ‘Good’ in three core areas - Medicine, Urgent and Emergency Care, and Critical Care, as well as receiving a ‘Good’ rating for being ‘Well-Led’.

This means that the Trust is now rated ‘Good’ in three domains – ‘Caring’, ‘Well-Led’, and ‘Effective’. The Trust also received its first ‘Outstanding’ rating for ‘Well-Led’ within Critical Care.

The Trust was one of the first to be recommended to be lifted out segment four of the System Oversight Framework (SOF) following the CQC inspection but before the Trust could formally exit it needed to be approved by our system regulator – NHS England / Improvement, which has now happened with a letter confirming the Trust’s transition to SOF 3, which means QEH no longer requires ‘mandated intensive support’ from its Regulator.

Commenting on the news James said:

“Coming out of special measures is a welcome step that reflects that hard work and commitment of QEH staff to deliver better care. The task now is to sustain those improvements and deliver further changes as the campaign continues to modernise the hospital to offer a better experience for patients, their families, and staff.”