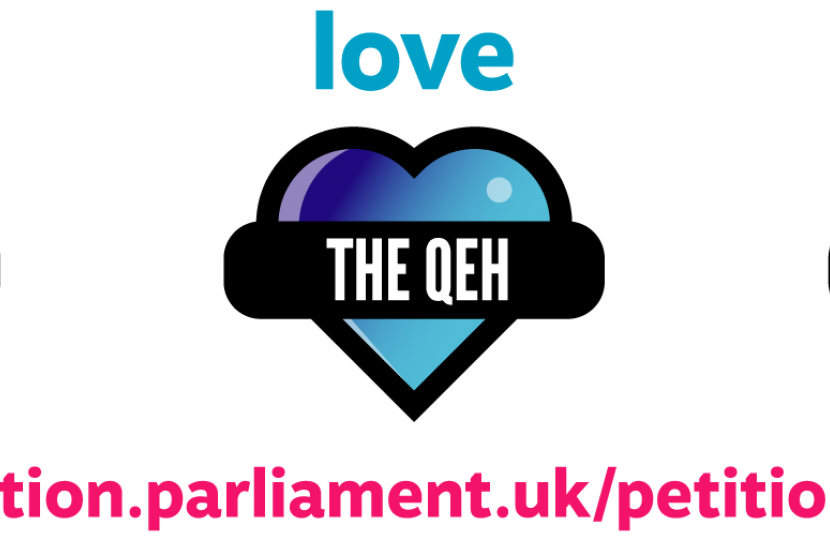 James is urging people to sign the Love West Norfolk, Love the QEH, Sign the Petition for a new QEH for King's Lynn and West Norfolk.

He said: "The QEH is at the heart of the west Norfolk community, loved by so many. It's current state of repair has been well documented and we know that the management team at the hospital are doing everything they can to ensure that it is safe.  The staff continue to deliver an exceptional service, but what they need are fit-for-purpose facilities.  We need to gain 100,000 signatures on this petition to trigger a debate in parliament, which is the right place for this to be discussed.  We need to do everything we can to ensure that a new hospital for this area is on the list, when the funding is announced later this year.  I would urge you to sign the petition and to get your friends and family to do likewise.  It is crucial that the government understands what the issues are with the hospital and also understands the strength of feeling about it."

The petition is available at https://petition.parliament.uk/petitions/590390.

"This is a welcome boost to the campaign and I was pleased to be one of the supporting signatories. Everyone who signs the petition will be helping to demonstrate to the Health Secretary and the government the importance of securing this investment to West Norfolk and the other areas QEH serves. Don't delay, sign today!

David Pomfret, Principal of the College of West Anglia, said: "Our population is growing and has a high number of ageing/retired residents as well as areas of deprivation. Our community deserves health equality and a new hospital with all the added benefits, including digitalisation, co-located services, and improved patient, staff and visitor experience.

"The College of West Anglia, with support from the government's Town Deal funding, will be launching a new School of Nursing Studies in 2022. This state-of-the-art training facility will create great skills development opportunities for QEH staff and routes into a nursing career for local people. This facility will ensure the retention and training of current and future generations of healthcare professionals in West Norfolk and the surrounding areas. We need a joined-up government which recognises the need for a modern hospital that reflects the quality of these training facilities. I urge you to join with us in signing this petition."

Cllr Stuart Dark MBE, Leader of the Borough Council of King's Lynn and West Norfolk, said: "I have been working with the QEH's management, the county council and the region's MPs to help magnify the bid.  This petition is part of that. I would urge everyone to sign this petition as soon as possible so that we trigger a debate in parliament.  A motion to council tonight, which I hope will be unanimously supported, confirms that the council will continue to stand shoulder to shoulder with the hospital's leadership team in their bid for a new hospital.

"I am delighted that Love West Norfolk are behind this campaign, as they have such a massive reach and a hugely positive influence.

"As Love West Norfolk Ambassador, James has kindly set up the petition which is now available for all to sign.  We are looking for 100,000 signatures which, given the population of west Norfolk and the number of people who use the hospital, should be achievable.  We owe it to our NHS colleagues to support them in any way we can, given what they have done for us throughout the pandemic.