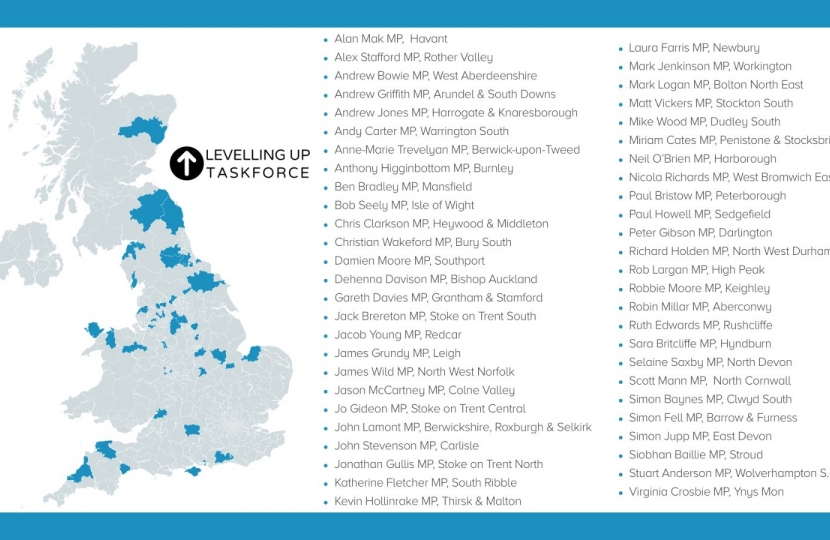 James has joined the 'Levelling Up Taskforce', which is a new group MPs aiming to bring ideas and investment to UK regions previously left behind.

Since being elected, James has been campaigning for increased investment in roads, rail, broadband, infrastructure, as well as for new funding to boost King's Lynn through the Future High Streets and Towns Funds.

This new Taskforce has been set up to promote ideas and policies to deliver on the government's levelling up agenda to boost growth across the country. The general election results mean that of the bottom quarter of seats in Great Britain with the lowest earnings, more are now held by the Conservatives than Labour.

The Taskforce will help address questions including definitions of levelling up; how to measure success; and how to get the private sector growing faster in these places.

To help the Government answer these questions, James and 40 other Conservative MPs have formed a new 'Levelling Up Taskforce'.

"I am pleased to be part of the new Levelling Up Taskforce.

This is an important agenda and I want to make sure that the views of North West Norfolk and the county are represented. Coastal towns and villages are a particular issue where there are challenges in terms of education and opportunities for young people.

The Taskforce's first report, 'Measuring up for levelling up', has been published today . It examines how we can measure progress and what’s been happening in different parts of the UK economy over recent decades. You can read the report here: https://www.ukonward.com/wp-content/uploads/2020/09/Measuring-up-for-levelling-up-2.pdf

The report also looks at the strengths and weaknesses of different possible measures of progress on levelling up. Given that different indicators can suggest quite different things, it argues that government should track a wide range of measures including productivity and overall income. If policy has to focus on a couple of measures, however, earnings and employment rates should be key because they allow for analysis of smaller areas than productivity or income, because of the way the data is produced.

The report proposes that government should produce geographical analysis of all budgets and fiscal events, setting out the different impact that tax and spending changes will have on different areas.