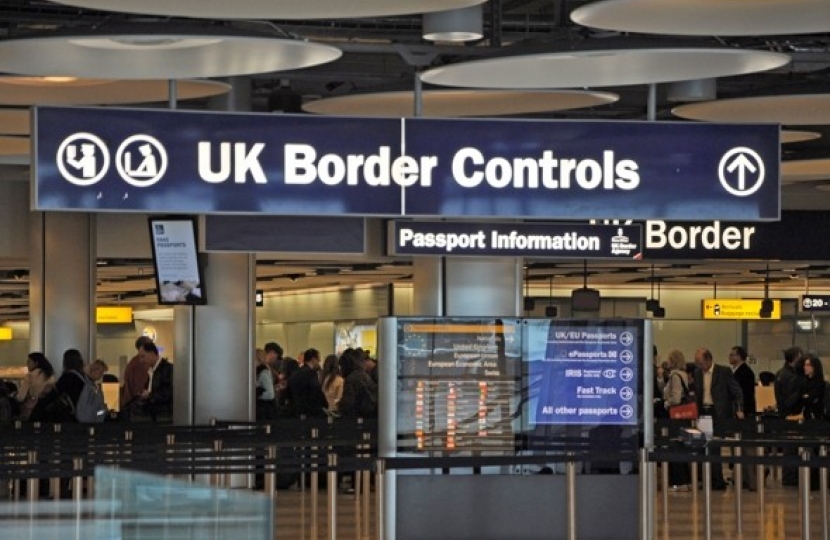 The Immigration and Social Security Co-ordination (EU Withdrawal) Bill 2020 introduced on 5 March will have its Second Reading in the House of Commons today [Monday 18 May 2020].

James is supporting this Bill which will become a landmark piece of legislation that ends EU rules on free movement, and paves the way towards a new immigration system that works for the UK today and in the future.

This legislation has come to Parliament just six months after the British people voted to introduce a points-based immigration system in the December General Election, and represents this government’s commitment to delivering a fairer immigration system that atrracts people based on the skills they have, not where they are from.

Now we have left the EU we have a historic opportunity to reshape UK immigration policy for the first time in decades.

This Bill will allow us to build a new system that prioritises the skills we need and people for what they can offer rather than where they come from.

Employers will be able to focus on recruiting the skills they need to innovate and invest in the British workforce, whether homegrown or recruited from abroad. For the first time in decades the UK will have control over its borders and the flexibility to attract top talent from around the world to complement the skills already here.

The Migration Advisory Committee report earlier this year provided a strong and evidence-based view for our future points-based migration system. The government accepted its key recommendations: a reduction in the general salary threshold for the key skilled worker visa from £30,000 to £25,600; moving the skills threshold from degree to A-level, to ensure that we include those with significant skills levels, such as senior carers; and tradable points, with a salary floor of £20,480 for jobs on the shortage occupation list or where significant potential is shown by holding a relevant STEM-based PhD.

Talented doctors, nurses and paramedics from all over the world have played a vital role in the NHS’s efforts to fight coronavirus and save lives. Our new immigration system will make it easier and quicker for medical professionals around the world to work in the NHS through a new fast-track NHS visa.

This historic piece of legislation gives the UK full control of our immigration system for the first time in decades and the power to determine who comes to this country.

Our new points-based system is firmer, fairer, and simpler. It will attract the people we need to drive our economy forward and lay the foundation for a high wage, high skill, high productivity economy.

More information can be found on the government's factsheets here: https://www.gov.uk/government/publications/immigration-bill-2020-factsheets

Further information on the points-based system will be detailed in the Immigration Rules published later in the year.