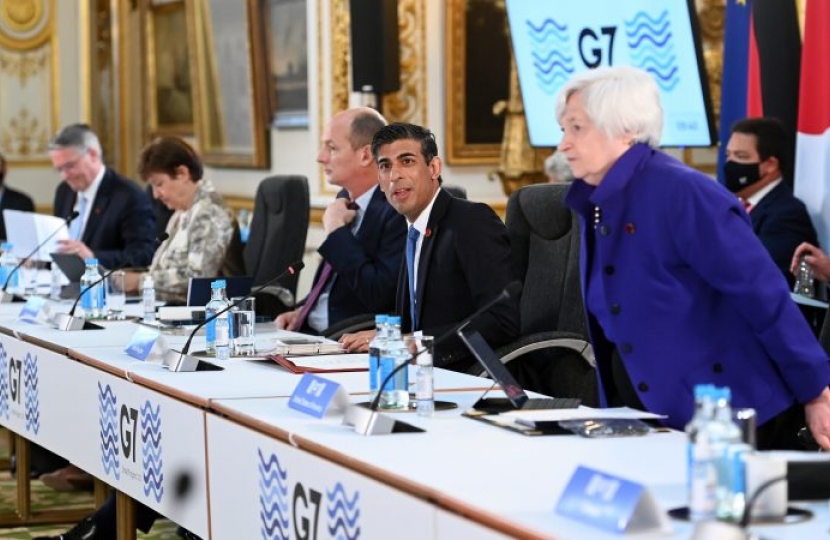 The G7 has agreed to back a historic international agreement on global tax reform for big international companies to start paying their fair share of tax.

Chairing the G7 Finance Ministers meeting in London, Rishi Sunak, Chancellor of the Exchequer, led efforts to tackle the tax challenges that arise from the global digital economy.

After years of discussion, finance ministers agreed to reforms which will see multinationals pay their fair share of tax in the countries they do business. It was also agreed that a global minimum rate of tax would ensure multinationals pay tax of at least 15% in each country they operate in.

To ensure markets contribute to the transition to net zero, the group also followed the UK’s lead by giving a commitment to make it mandatory for firms to report the climate impact of their investment decisions – and concrete steps to crack down on environmental criminals.

the Finance Ministers agreed on a two Pillar global solution to tackle the tax challenges arising from an increasingly globalised and digital global economy:

Discussions on the two Pillars have been ongoing for many years – with the Chancellor making securing a global agreement a key priority of the UK’s G7 Presidency. The agreement will now be discussed in further detail at the G20 Financial Ministers & Central Bank Governors meeting in July.

Six years since the Task Force on Climate-Related Financial Disclosures (TCFD) was created, the UK has been instrumental in getting G7 countries to move towards making climate disclosures mandatory across their respective economies. It comes just over six months after the UK led the way by being the first country in the world to commit to do so in November 2020.

This is a major step towards ensuring the global financial system plays its part transition to net zero, as investors better understand how firms are managing climate risks and can allocate finance accordingly.

A coordinated G7 approach is crucial to avoid inconsistent information across markets and extra red tape, so the Finance Ministers also backed work by the International Financial Reporting Standards Foundation to develop a baseline global standard for high-quality, granular sustainability reporting, built from the TCFD framework and work of sustainability standard-setters.

In support of the UK’s work to foster a nature-positive economy, the Finance Ministers welcomed the imminent launch of a taskforce on nature-related financial disclosures – to mirror the TCFD – and agreed to crack down on the proceeds of environmental crimes by introducing and strengthening central company beneficial ownership registries. The UK was one of the first countries in the world to introduce a public beneficial ownership registry in 2016.

Making beneficial ownership public through these registries will help law enforcement to trace ill-gotten gains that have been laundered through complex company structures. They also help to identify who ultimately owns or controls companies and brings criminals to justice. The increased transparency will protect the UK and the rest of the G7 from other criminal threats like corruption, fraud and terrorist financing.

The G7 committed to continue supporting the poorest and most vulnerable countries as they address health and economic challenges associated with COVID.

Building on the milestone $650 billion general allocation of Special Drawing Rights (SDRs) earlier this year, Finance Ministers and Central Bank Governors called for swift implementation by the end of August.

G7 countries also agreed to actively consider voluntarily channelling a proportion of their allocated SDRs to support further health needs, such as vaccinations, and help enable greener, more robust economic recoveries in the most affected countries.

Tackling debt vulnerabilities and promoting debt transparency is essential in unlocking sustainable and inclusive growth in developing countries. The G7 also committed to publishing the detail of new lending on a loan-by-loan basis and hope the G7 leading the way on debt transparency will pave the way for G20 nations and private sector creditors to do the same.

The Health Secretary visited QEH to see for himself the structural roof issues and agreed that there needs to be a long term solution for the hospital.