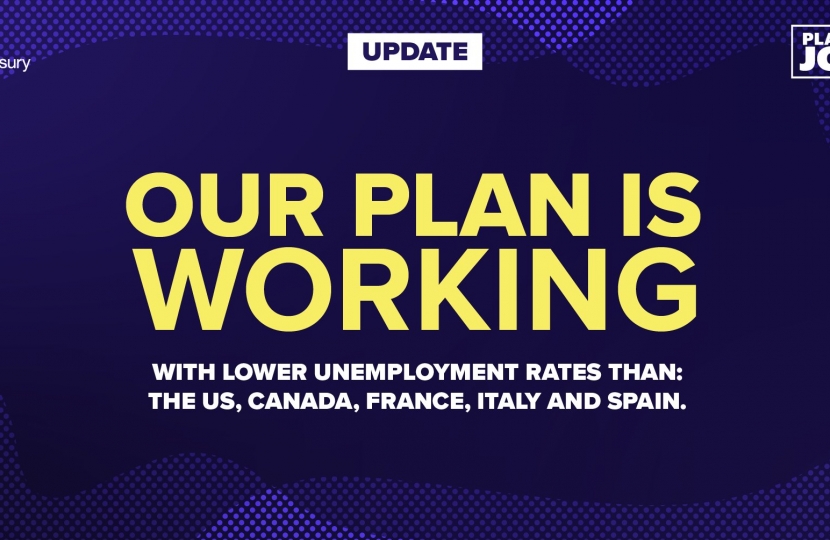 The government's 'Plan for Jobs' has supported millions of people since the pandemic began. This progress updates shows how it will continue supporting people into work and develop the skills they need to thrive as the UK emerges from the pandemic.

The latest data shows that the plan is working across all parts of the UK. The headline unemployment rate has now fallen for six consecutive months. People are rapidly coming off the emergency employment and income support schemes that have helped millions of people. Investment in infrastructure and the green industrial revolution is already creating high-quality jobs.

Finally, the Plan for Jobs is giving people the skills and opportunities they need to succeed through schemes like Kickstart, which has so far seen over 63,000 young people start a job.

In their latest forecast the Bank of England do not expect the unemployment rate to rise any further, with their forecast averaging 4.7 per cent over the second half of the year. Unemployment in the UK is lower than in the US, Canada, France, Italy and Spain. In the 3 months to June 2021, it was just 4.7%, which is low by historical standards - and recovery is strongest amongst under 25s.

The UK has a strong labour market, which pre-pandemic delivered record employment rates, underpinned by effective support from Jobcentre Plus for those searching for work. This has allowed the labour market to continue to outperform expectations.

As the Plan for Jobs continues post-September, £650 billion will be invested into the most ambitious programme of infrastructure projects on record – supporting 425,000 jobs a year over the next four years.

More than 85,000 new apprentices have been hired under the incentives payments scheme – with 75% under the age of 25. We’ve also tripled the number of traineeships for 16–24-year-olds, with more than 17,000 benefitting so far.

Finally, the Restart scheme will continue to offer long-term unemployed people on Universal Credit the support they need to re-enter the workforce and find jobs in their local area.

Both the CJRS and SEISS grants will be closing at the end of September but the government is maintaining its focus on helping people back into work through the Plan for Jobs. This strikes the right balance between supporting the economy as it opened up, by providing support and protecting incomes through the summer, and ensuring incentives are in place to get people back to work as demand returns.

The Coronavirus Job Retention Scheme (CJRS) was introduced to help employers retain their employees through the pandemic aiding businesses and protecting livelihoods. The scheme has supported people through the pandemic as it was designed to do, and now the economy is reopening, people have been rapidly coming off furlough. The CJRS is therefore striking the right balance between supporting the economy as it opens up, continuing to provide support and protect incomes, while ensuring the right incentives are in place to get people back to work as demand returns.