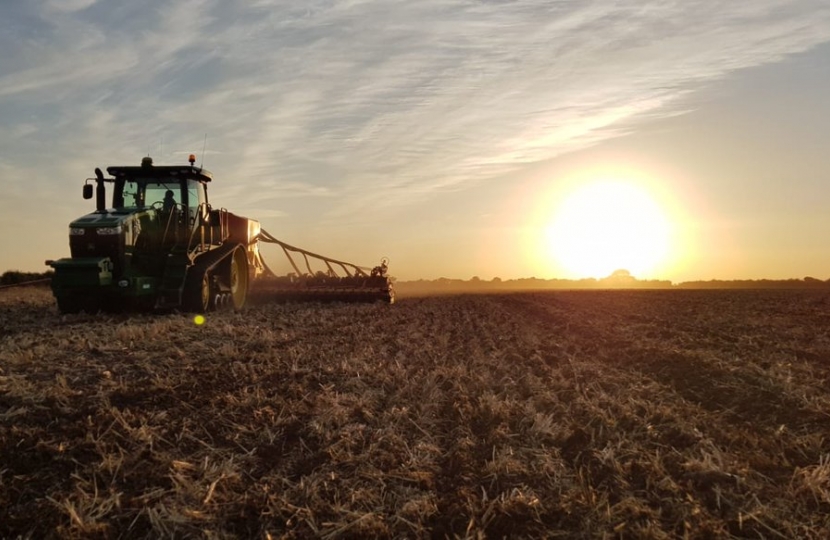 This is the first major overhaul of agricultural policy in almost 50 years, and is a huge opportunity for Britain and the farming industry.

Having left the European Union,  James welcomes the chance the UK has to tailor our agriculture policy to improve productivity and incentivise even better farming. We will move away from the EU’s bureaucratic Common Agricultural Policy and towards a fairer system where hard-working farmers are paid "public money for public goods", such as such as better air and water quality, higher animal welfare standards, improved access to the countryside or measures to reduce flooding. James wholeheartedly support this Bill and look forward to its positive impact in West Norfolk.

Food and farming is very important to West Norfolk and a bedrock of the British economy and environment. The industry generates £112 billion a year, and helps to shape some of our finest habitats and landscapes.

Farmers have proven themselves to be more important than ever as we rely on them for our reliable food supply chain in these challenging times.

A number of amendments were tabled to the Bill which were designed to address concerns about Free Trade Agreements, particularly with the United States. There are concerns that a FTA with the USA and other countries will allow for food produced with lower animal welfare standards than those allowed in the UK to undercut the UK market. I have raised these concerns directly with the International Trade Secretary and other ministers.

Having spoken to the Secretary of State for International Trade after the end of the first day of her leading negotiations with her US counterparts, James also asked the Secretary of State a question on this topic during International Trade Questions where she confirmed that the UK would not be lowering our food import standards as a result of any trade agreement. Please do watch the minister’s answer here. In addition, the EU Withdrawal Act transferred all existing EU food safety provisions onto the UK statute book, and Ministers have made clear these standards will not be watered down in pursuit of any trade deal now that the UK has left the EU.  Our product import and food safety standards are not covered by a FTA and will remain unchanged, so we will not be accepting growth hormone-injected beef products or those made with chlorinated chicken, for example.

But, importantly, this is not the same as setting production standards for any country trading with the UK. This would be against World Trade Organisation rules, and does not form part of any FTA that the UK has ever signed up to, or the EU, or any other international FTA. To put such a requirement into this Agriculture Bill would have the effect of preventing us concluding FTAs in the future and would prevent us from rolling over our current agreements with countries like Japan, South Africa and Canada, none of which contain such a requirement. It would also be contrary to our trade negotiating position with the EU, where we are rejecting the EU demand for “a level playing field”, for the same reasons. By blocking trade deals it would close off export opportunities for farmers and other sectors.

For all these reasons James decided to vote against the amendment and, to keep the Agriculture Bill focussed on its core objectives of setting out the framework for agriculture for the next generation.

Farming organisations and environmental groups support the new ‘public money for public goods’ approach to future farm support schemes. Farmers however want food production itself to be considered a public good and for food production to be central to the Bill. This Bill (unlike the previous Bill) requires Ministers to have regard to the need to encourage the production of food in England, in an environmentally sustainable way. The NFU has welcomed recognition in this Bill that “food production and caring for the environment go hand-in-hand”.

There are several additions to this Bill compared to the previous Bill. New measures include:

The new Bill also gives the Secretary of State for Environment, Food and Rural Affairs the power to make regulations relating to marketing standards for products marketed in England and carcass classification by slaughterhouses in England. This will include the ability to amend or revoke current marketing standards and carcass classification rules as set out in retained EU legislation and in domestic legislation, as well as the flexibility to introduce new standards and rules that will be tailored to suit the domestic agricultural sectors.

To watch the debate in the House of Commons please click here.