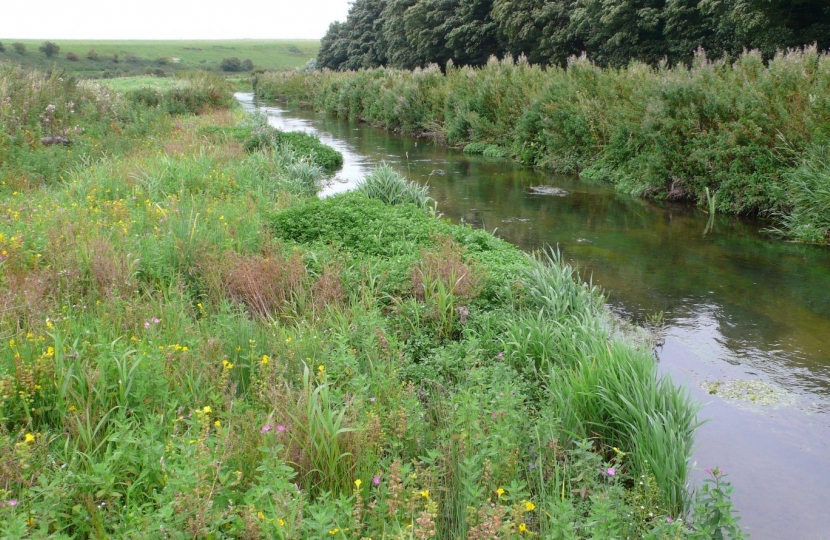 The rivers of Norfolk are unique due to their underlying chalk bedrock, which stretches across eastern England. The permeable chalk acts as a sponge, absorbing rainfall and filtering the water, before it is released though springs. This provides a constant supply of clean, mineral rich water to Norfolk’s chalk rivers.

Their clear water flows from chalk aquifers - stores of underground water that are replenished when it rains. The Norfolk Rivers Trust has done much to restore these valuable habitats and eco-systems. However, ground water levels are low which means that chalk streams in England are running dry. We need a balanced approach that protects these streams while supporting farmers and industrial users who need water to operate.

James is pressing for the wetland area at Ingoldisthorpe which works as a natural treatment plant cleaning millions of litres of water a day before it is returned to the River Ingol to be the first of many projects.

This project created in a partnership between the Norfolk Rivers Trust and Anglian Water is the first of its kind in England. Water passes through four interlinking pools in the wetland and is further filtered and cleaned by 25,000 wetland plants. These plants purify the water.Once the water has filtered through each of the pools, it is then returned to the River Ingol, one of North West Norfolk's chalk streams. This additional, natural filtering process further improves the quality of the water being returned to the river.

Chalk rivers offer a unique environment for the growth of aquatic plants such as water crowfoot, starwort, fool’s watercress and water parsnip. Chalk streams are also noted for their rich insect life and the abundance and diversity of insect life helps sustain the communities of fish that inhabit the rivers. The rivers are also home to a variety of mammals such as water vole and otters. The aquatic plant-life and marshy river edges provide excellent feeding areas for birds

Over centuries, the rivers have made way for agriculture and have been straightened and dredged, drained and embanked. Fallen trees, an important source of shelter and food, have been removed, and in other places trees have been planted to purposefully drain springs and wetlands.

Reversing these processes is difficult, but effective, and can be achieved in places without a loss of agricultural productivity. In other places on the Nar and Babingley, Wensum and Glaven, Stiffkey and Burn, hidden stretches of these magical and unique habitats remain.

A variety of conservation, education and community projects have taken place on nine chalk-fed rivers in Norfolk as part of a £1.3 million partnership between the Norfolk Coast AONB, Norfolk County Council, The Wild Trout Trust and local Environment Agency representatives.

Read more about specific projects below:

The Government has reinforced its commitment to taking tough action to improve water quality with the Environmental Audit Committee welcoming its response to a recent inquiry on water quality in rivers.

James has welcomed new investment in improve the sewage network in the Creakes and £1.5 million to upgrade Burnham Market Water Recycling Centre (WRC) in response to the flooding last winter.

Measures in the Environment Bill to tackle storm overflows

James sets out the measures in the Environment Bill he supported to help tackle the issue of storm overflows discharging sewage.

Norfolk riverbanks and watercourses to be planted with new woodland

Over 3,000 hectares of new woodland is set to be planted along England’s rivers and watercourses including in North West Norfolk with backing from the country’s leading environmental organisations.

The Government has strengthened its commitment to protect the environment for future generations and build back greener with new amendments to the landmark Environment Bill including requirements that water companies monitor their impact on local water quality.

On Friday James met with Anglian Water to talk about their water optimisation and leakage programme which is a key part of its water resource management plan.

Researchers from Natural England have shown how different UK habitats can take carbon out of the atmosphere and help us hit net zero by 2050, while safeguarding both biodiversity and conservation.

The government has confirmed that new measures to reduce sewage discharges from storm overflows will be put into law as part of an ambitious agenda to leave the environment in a better condition than we found it.