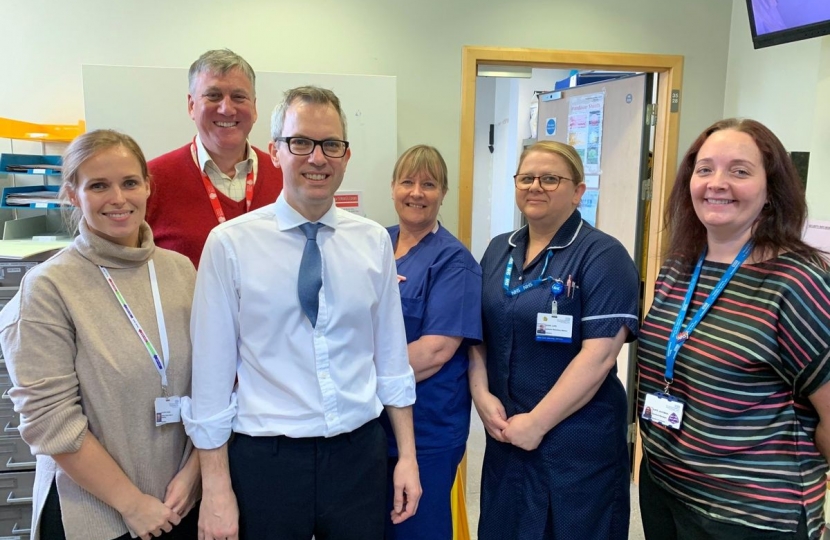 James is campaigning for Queen Elizabeth Hospital to get more investment to support staff in delivering services the people of West Norfolk deserve.

The Queen Elizabeth Hospital (QEH) is extremely important to communities across North West Norfolk serving 330,000 people across Norfolk, Lincolnshire, and Cambridgeshire. Although it is in special measures,the new leadership team has a five year strategy to take the hospital to a good and then ultimately an excellent rating. This is a clear strategy to improve health and clinical outcomes in West Norfolk for patients and to strengthen staff engagement. James will continue to play his part in supporting Team QEH in delivering this vision

James' first official visit as a MP was to QEH and he has spent time with doctors, nurses, and vital support staff including the infection control team, security staff and others. The passion of staff who are proud of improvements they have delivered for their patients comes across clearly as does their desire to continue delivering better care. During the Covid-19 pandemic, QEH staff have shown incredible dedication in dealing with an unprecedented health crisis.

An important part of the strategy is to modernise the estate and harness digital technology. This year marks the 40th anniversary of the Queen Elizabeth Hospital, yet it was built with a life expectancy of 30 years and the design does not lend itself to current clinical practices, care pathways or patient flows. A&E is too cramped to meet demand, and the roof has major structural issues.

James used his Maiden Speech to make the case for the capital investment proposal that the Trust has developed and has lobbied the Secretary of State for Health regularly since.

In  July 2020, James pressed the Prime Minister on the case for including the QEH in the government's health infrastructure plan and said that this would be well deserved recognition for the dedication all the staff have shown through the Covid-19 pandemic. The Prime Minister noted the £9 million of capital funding provided last year and said further measures were under active consideration.

James will continue to press for investment into QEH to help continue the real improvements that the people of North West Norfolk deserve.

In September, £597,000 of capital funding was announced for a School of Nursing at the College of West Anglia. This was a bid James has championed and asked the Prime Minister to support. It will create high quality training opportunities for West Norfolk with the college delivering Level 5 (foundation degree equivalent) Associate Nursing Apprenticeship which will allow the QEH to recruit more nursing staff locally.

In October, the government announced a list of 40 new hospitals and James was disappointed that QEH has not been added to the list announced in the previous phases of the health infrastructure programme. At the same time, the government announced plans to build a further 8 additional hospitals in addition to the 40 by 2030. QEH has recently put forward a strong case for investment. It is the same age and RAAC Plank design as two other "Best Buy" hospitals in the areas that were on the list.

The  bid process for the remaining eight hospitals is currently being designed. As these schemes will be delivered in the second half of the decade, the competition process will be announced in due course and the government will continue to  work with trusts and regions to ensure the criteria for selection best meets the needs of the NHS.

James is continuing to working with the Trust and other MPs to ensure it is a serious contender for one of the eight additional new hospital schemes.

During the Chancellor's statement on the 2020 Spending Review, James welcomed the focus on the NHS and infrastructure and raised the importance of investing in the QEH. He highlighted that the hospital is now 40 years old having only been built to last 30 years.

On Monday at the Public Accounts Committee, James pressed senior Department of Health and Social Care officials on the new hospital building programme.

New School of Nursing gets approval

On Wednesday, James was called for his first Prime Minister's Question since being elected in December (selection takes place by a random ballot of all members applying to ask a question).

James Wild MP is delighted to hear that routine (elective) care and treatment is restarting at the Queen Elizabeth Hospital, King’s Lynn.

New five-year strategy for QEH will improve the lives of patients, staff and the community in King’s Lynn and West Norfolk.

On Monday 8th June the Queen Elizabeth Hospital in King's Lynn formally launched their new five-year strategy, setting out their ambitions for the near future.