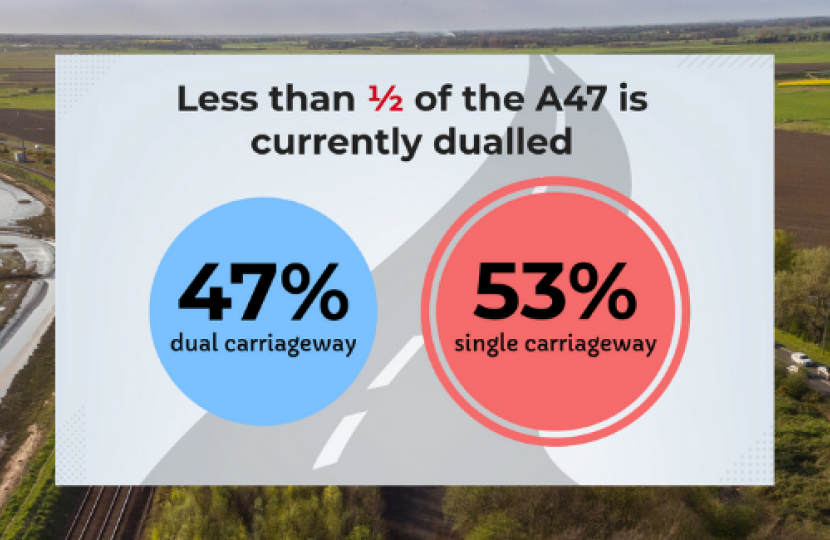 James is working with MPs across Norfolk to make the case to Ministers for  more investment in the A47 to boost jobs and growth.

During the 2019 election campaign the then Chancellor of the Exchequer joined James in King's Lynn and heard from business about the importance of the A47 to the economy of North West Norfolk. The Prime Minister also visited East Anglia and was briefed on how vital this east-west corridor. Since the election, James has worked with other MPs to lobby the Transport Secretary, Chancellor, and other ministers to secure investment.

March 2020 - Department for Transport published its RIS2 setting out plans to spend £27.4 billion over the next five years on our strategic road network.

James was pleased that six schemes to improve the A47 were approved:

These schemes represent the biggest one time investment in the A47. The six A47 schemes are currently scheduled for a phased start of works, with the first construction starting in 2021. This has been done to smooth the timing and frequency of the roadworks along the A47, reducing the impact on the public. James is pressing for this work to start as soon as possible and met with Highways England's Regional Director for the East who confirmed work is planned to begin in 2021.

In addition, the A47/A1101 Elm Road Junction has been specifically cited as part of the Road Investment Strategy 3 pipeline from 2025.

The RIS2 can be read here.

Looking ahead, James continues to support three schemes backed by the A47 Alliance, in particular Tilney to East Winch (including Hardwick flyover). Investing in this scheme would help level up the area, generating considerable benefits by supporting existing businesses and attracting more jobs and investment, enhanced productivity, and unlocking new homes in transport corridors along the route. It would also mean reduced delays and fewer fatalities.

James Wild joins MPs in calls for more investment in A47

A group of MPs representing Norfolk, Cambridgeshire, and Suffolk have written to the Secretary of State for Transport urging him to approve more investment in the A47.