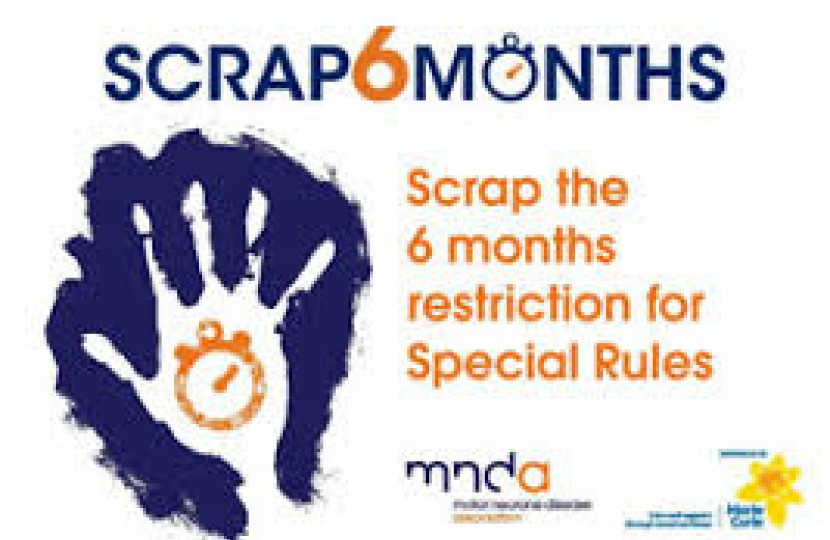 Currently the Special Rules for Terminal Illness which enable fast track access to claim benefits only apply if an individual has been given a diagnosis that they have a reasonable expectation of death within six months. Anyone with a longer prognosis or unpredictable illness such as Motor Neurone Disease is excluded. In July 2019 the government announced a review into the way terminally ill people are supported by the welfare system.  James is calling on the government to scrap the six month rule and make it easier for anyone with a terminal illness to get the benefits they need.

Since he was elected in December, James has been approached by constituents raising concerns about the current rules and he has joined the Motor Neurone Disease All Party Group which is supporting the campaign. He has met family members who have described the additional stress that the current rules involve.

James raised the issue at Department for Work and Pensions questions in Parliament saying 'My North West Norfolk constituents suffering terminal illness want to see the six month rule scrapped so will he continue to work with the Motor Neurone Disease Association, Marie Curie and others to find a solution that works for all of them?'

In response, Justin Tomlinson MP, Minister for disabled people, health and work, confirmed that the rules would change, responding that 'The reason we commissioned this review was because the status quo has to change and we recognise that.  I wish to pay tribute to the organisations who have been supporting a thorough review including MND, Marie Curie, Hospice UK, MacMillan, RCN, Sue Ryder, and NHS England.'

An all-party review carried out last year found that since 2013 at least 17,000 people have died waiting for the benefits they were rightfully due. It said those diagnosed with terminal illness should have fast-track access to benefits, to free them from worrying about their finances.